Is this leadership by example?

Loaded with vices and defects,
Stigma affront and evil,
The pariah goes without soul and without affection
Traveler through the ages ...
Attached to the yoke and to the tomento
To tedium, hatreds and resentments,
Drag with deep discouragement
His vile prejudices and pains.
Fighting with fierce viciousness
The bread, the rag and the dump,
Fatal future always awaits you
Death by starvation as augury
And blind without faith, without hope
Overcome in the chaos of the West,
Skeptic looks without confidence
The red dawn of the east ...
Meanwhile, vindicts are rigged
The red libertarian banners,
What death or justice do you advise?
In books, tribunes and balustrades ...
So, I redeem for myself
The outcast, rebellious and already conscious,
Protest of the bottom of its abyss
And the light explodes under his forehead!
And execra with irrefutable sight,
The ominous yoke of their sorrows,
Tronchando of a formidable blow,
Errors, damages and chains!
And bold in the fratricidal struggle
From the iron system that brings it down,
The saints right to life
Defend in the arena of combat.
And wrapped in the glory of his idea,
Swearing the faith of his oriflama,
With his ax, his bombs and his tea
To be free and human is proclaimed!
Luis Olea

Actually, not a bad article at all.
- - -
Anarchy: What It Is and Why Pop Culture Loves It

In a pop-cultural sense, at least, the idea of anarchy has been characterized by either a middle-fingers-up, no-parents-no-rules punk attitude, or a panicky, more conservative outlook used by national and state sources to represent violent chaos and disorder. Today, we can see an extremely serious, radical leftist political philosophy on T-shirts at Hot Topic.

So what is anarchism? What do those people raising black flags and circling A’s really want? Here’s what you need to know:

Anarchism is a radical, revolutionary leftist political philosophy that advocates for the abolition of government, hierarchy, and all other unequal systems of power. It seeks to replace what its proponents view as inherently oppressive institutions — like a capitalist society or the prison industrial complex — with nonhierarchical, horizontal structures powered by voluntary associations between people. Anarchists organize around a key set of principles, including horizontalism, mutual aid, autonomy, solidarity, direct action, and direct democracy, a form of democracy in which the people make decisions themselves via consensus (as opposed to representative democracy, of which the United States government is an example).

tcpip at Narin calls on youth to resist
At twenty-two years old I was not an armed libertarian socialist in a warzone. Mind you, I didn't wear a bunny jacket either. 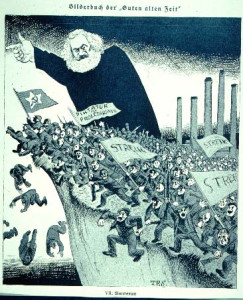 The specter of communism, which had been discerned by Karl Marx and Friedrich Engels in 1848, has never gained flesh and blood (if, of course, we won't treat monstrous regimes most of which are now solidly buried into the graves dug by the mole of History, as "communist"). Something went wrong…

If we look into history we shall find that Marxism, as an idea which acquired consciousness of the masses, was active only for a rather short time period - that is about half a century in Europe (70s of the XIX century - 20s of the XX century) and the same span in Asia and Latin America (20s - 70s of the XX century). Thus, Marxism met mature stage of the industrialization process in the West and the initial stage of that one in the East.

What's up to nowadays?
( Collapse )
Collapse